The ‘Stansted 15’ protesters sobbed with joy today and declared themselves ‘ex-terrorists’ after the anti-immigration activists had their convictions overturned for grounding a flight due to deport 60 criminals including a child rapist and a murderer to Africa.

The group cut through the Essex airport’s perimeter fence in March 2017 and locked themselves together around a Boeing 767 jet chartered by the Home Office to transport people from UK detention centres for repatriation to Africa.

In a tweet after the judgment was published, one of the protesters, Ben Smoke, wearing a jumper emblazoned with ‘ex-terrorist’, said: ‘WON OUR APPEAL!! I’m so happy. I can’t stop crying. We f***ing did it!!!’ Lyndsay Burtonshaw, said: ‘We got the judgement from our appeal for our terrorism-related conviction for the #Stansted15 action. WE WON!’

Their protest took airport security and police more than an hour to remove the activists before they were arrested in the late-night incident which saw flights to Stansted diverted including arrivals from Ibiza, Warsaw, Belfast, Bilbao, Murcia, Dublin and Berlin.

Those due to have been removed from Britain included 25 criminals who had been imprisoned for offences including murder, child rape and grievous bodily harm.

The ‘Stansted 15’ were convicted at Chelmsford Crown Court in December 2018 of an offence arising out of the March 2017 incident. Three were given suspended jail sentences and the other 12 were handed community orders.

But today they had those convictions for endangering the safety of an aerodrome overturned after judges agreed the legislation is meant for terrorists rather than protesters.

The ‘Stansted 15’ protesters are celebrating today with one member Ben Smoke wearing a jumper emblazoned with ‘ex-terrorist’ after the anti-immigration activists had their convictions overturned for grounding a flight due to deport 60 criminals to Africa. Lord Burnett said the protestors ‘should not have been prosecuted for the extremely serious offence … because their conduct did not satisfy the various elements of the offence. There was, in truth, no case to answer.’

Law that the activists were convicted under

The 15 protesters were convicted two years ago of intentional disruption of services at an aerodrome, contrary to section 1(2)(b) of the Aviation and Maritime Security Act (Amse) 1990.

The 15 protesters were convicted two years ago of intentional disruption of services at an aerodrome, contrary to section 1(2)(b) of the Aviation and Maritime Security Act (Amse) 1990.

The law states that is an ‘offence for any person by means of any device, substance or weapon unlawfully and intentionally’ to ‘disrupt the services of such an aerodrome, in such a way as to endanger or be likely to endanger the safe operation of the aerodrome or the safety of persons at the aerodrome’.

The legislation was introduced soon after the Lockerbie bombing in 1988.

The activists’ lawyers claim the law was ‘introduced in order to enact into domestic legislation the provisions of an international counter-terrorism convention, which is terror related and in our view should not have been used against peaceful protesters’.

The Amse law was used mostly recently to detain seven people after military forces stormed an oil tanker off the Isle of Wight last month.

They were arrested on suspicion of seizing or exercising control of a ship by use of threats or force.

In documents before the court, the Stansted 15’s barristers argued this law is intended to deal with violence of the ‘utmost seriousness’, such as terrorism, not demonstrators.

They argued that Amsa is not concerned with risks of ‘a health and safety-type nature’ posed by those who have trespassed at an airport without causing or intending to pose ‘a direct risk of endangerment’ to the operation of the airport, or people there.

The papers said that, instead, the law relates to ‘an offence of unlawful violence of the utmost seriousness, directed at individuals who intentionally and unlawfully deploy offensive devices, substances and/or weapons, intending by that deployment to disrupt airport services in such a way as to endanger or to be likely to endanger the safe operation of the airport as a whole or the safety of the body of persons at such airport.’

Lawyers for the group also argued that the Attorney General – who is required to sign off on the use of this legislation – should not have granted consent for the law to be used in this case, that the Crown Court judge, Judge Christopher Morgan, made errors in summing up the case, and there were errors in directions given to the jury.

In their written argument, barristers representing the Crown said the convictions are safe and that the trial judge was correct.

For the Crown, Tony Badenoch QC told the court: ‘We don’t accept that the Act is constrained to terrorism and nothing else.’

The plane had been chartered by the Home Office to remove 60 people to Nigeria, Ghana and Sierra Leone.

Those due to be removed included 25 criminals who had been imprisoned in UK jails for serious offences including  murder, rape of a minor and grievous bodily harm.

At the time of the planned charter flight, no individuals on the flight had any outstanding legal claims that would have prevented their removal.

Of the original 60 individuals, 49 were subsequently removed and 11 individuals – including six foreign national offenders – currently remain in the UK following or pending appeal. Six members of the ‘Stansted 15’ (left to right) May MacKeith, Ben Smoke, Helen Brewer, Emma Hughes, Mel Evans, and Ruth Potts, outside the Royal Courts of Justice in London during the appeal in November One of those on the flight was murderer Quam Ogumbiyi, who was jailed in 2004 for stabbing a man to death in front of his family in Harringay, North London.

Ogumbiyi, then 23, plunged a knife into Ibrahim Asik’s chest after wrongly accusing him of burgling his girlfriend’s flat.

Cemasik Asik, 32, one of Ibrahim’s sons, told last year how his father’s murder had a devastating impact on his family, leaving him and his two brothers homeless.

In 2011, Ogumbiyi was given an additional life sentence after he and two others carried out a knife attack on Bosnian war criminal Radislav Krstic in prison.

It is understood Ogumbiyi was deported to Nigeria two days after the protesters stopped the Stansted flight.

Figures in court papers said that as of March 2019, 11 of the deportees on the flight grounded by the protest group’s actions were still in the UK, with two confirmed as victims of modern day slavery and a third granted asylum on human rights grounds.

In a statement on behalf of the group, May MacKeith, one of the protesters, said: ‘The nightmare of this bogus charge, a ten-week trial and the threat of prison has dominated our lives for four years.

‘Despite the draconian response we know our actions were justified.

’11 people, including survivors of trafficking, who would have been deported that night are still in the UK.

Lana Adamou, lawyer for civil liberties group Liberty, said: ‘These charges were an attack on our right to express dissent and it is good news for all of us they have been overturned.

‘The prosecutions of the Stansted 15 are part of a bigger picture. The Government is trying to weaken and water down our right to protest and, by extension, to chip away at the ways we can stand up to power.

‘All too often it is the most marginalised in society, and those acting in solidarity with them, who bear the brunt of over-zealous policing and crackdowns on protest, making it even more important for the Government to take steps to facilitate protest and ensure these voices are heard, rather than find ways to suppress them.’

‘Stansted 15’ protesters who rescued a killer and a child rapist The 15 protesters who stopped criminals being deported at Stansted were found guilty under anti-terror legislation but were spared jail after the judge decided they were motivated by ‘genuine reasons’ and lacked ‘grievous intent’. They are pictured outside court in 2019:

Not pictured: Melanie Strickland, 35. A solicitor who was part of a 2006 Heathrow protest. 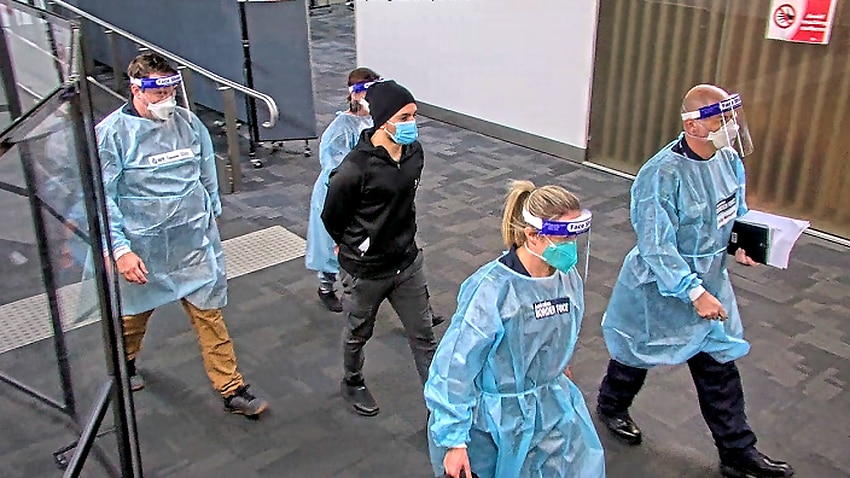