Protests over the deaths of two black men in Washington DC  and Philadelphia turned violent Tuesday with stores looted and tear gas deployed.

Karon Hylton, 20, died Monday while being chased on a Revel scooter by police in the nation’s capital. Walter Wallace was killed Monday when Philadelphia police officers fired at him. Chief Police Inspector Frank Vanore said that police had received a call about a man screaming and that he was armed with a knife.

Pictures from both cities Tuesday showed continued unrest over the deaths.

Windows were smashed by protesters at a police station in DC, NBC reports; one person was arrested and four officers are said to have suffered non life threatening injuries.

Hylton’s mom was filmed outside the police station in the city Tuesday telling officers: ‘You know it was wrong.’ She later appears to have been maced by officers during protests.

Other footage from the city shows tear gas has been deployed. Black Lives Matter DC tweeted: ‘We need all hands on deck @MayorBowser and @ChiefNewsham terror gang is literally at war with the community at 4D police station. They shooting teargas and rubber bullets.’

Images from Philadelphia shows stores in the city being looted. Philadelphia Police tweeted: ‘*Alert* A large crowd of appx 1000 is looting businesses in the area of Castor and Aramingo. Avoid the area.’ Police later urged residents to stay inside their homes.

The Philadelphia Office of Emergency Management tweeted: ‘The Philadelphia Police Department is requesting that all residents in the 12, 16, 18, 19, 24, 25, and 26th Districts remain indoors except when necessary. These areas are experiencing widespread demonstrations that have turned violent with looting.’

Philadelphia officials had anticipated a second night of unrest Tuesday, and a Pennsylvania National Guard spokesperson told The Inquirer that several hundred guardsmen were expected to arrive in the city within 24 to 48 hours.

Philadelphia: A protestor confronts police during a march Tuesday in Philadelphia. Hundreds of demonstrators marched over the death of Walter Wallace, a black man who was killed by police in Philadelphia on Monday. Washington DC: Washington Metropolitan Police Department officers stand near the fourth district police station in Washington, Tuesday after the death of Karon Hylton on a Revel scooter by police in the nation’s capital Washington DC: Demonstrators broke windows at the police station in protest over a fatal a crash involving a moped driver who died when he police were attempting to pull him over. The crash happened last Friday Philadelphia officials had anticipated a second night of unrest Tuesday, and a Pennsylvania National Guard spokesperson told The Inquirer that several hundred guardsmen were expected to arrive in the city within 24 to 48 hours Protesters confront police during a march, Tuesday. Police shot and killed the 27-year-old Wallace on a Philadelphia street after yelling at him to drop his knife.

Wallace was shot before 4 p.m. Monday in an episode filmed by a bystander and posted on social media. Witnesses complained that police fired excessive shots.

His family had called for an ambulance to get him help with a mental health crisis, not for police intervention, their lawyer said Tuesday.

Officers said they found Wallace holding a knife and ordered him to drop the weapon several times. Wallace advanced toward the officers, who fired several times, said Officer Tanya Little, a police spokesperson.

Throughout the day Tuesday, state and local officials called for transparency and a thorough investigation, including the release of body camera footage from the two officers who fired their weapons. Wallace was shot multiple times and killed around 4 p.m. Monday when officers were called out to reports of a domestic incident at Locust and South 61st streets in Cobbs Creek, West Philadelphia. The footage shot on a witness’s smartphone begins with Wallace walking between parked cars outside the front of some homes in the residential neighborhood. A woman, later identified as his mother, is following him trying to get hold of him as shouts ring the air Karon Hylton, 20, died Monday while being chased on his scooter by police in the nation’s capital

Police Commissioner Danielle Outlaw said at a news conference Tuesday that she was still reviewing when and what information would be released to the public. The officers had not been interviewed as of Tuesday afternoon, she said. Neither had a Taser or similar device at the time of the shooting, Outlaw said, noting the department had previously asked for funding to equip more officers with those devices.

Outlaw said the officers’ names and other identifying information, including their race, would be withheld until the department could be sure releasing the information would not pose a threat to their safety. The officers were taken off street duty during the investigation.

Police officials said they could not confirm what information had been given to the responding officers, whether they were told about a possible mental illness or how many calls they had received for help at Wallace’s address Monday.

Wallace’s father, Walter Wallace Sr. said Tuesday night that he is haunted by the way his son was ‘butchered.”It’s in my mind. I can’t even sleep at night. I can’t even close my eyes,’ he said.

Wallace Sr. condemned the violence Tuesday night, adding: ‘They’re not helping my family, they’re showing disrespect. Stop this violence and chaos. People have businesses. We all got to eat.’

DC police say Hylton died after they saw him riding without a helmet. But the dad-of-one’s friend said: ‘They hit him in the back of his scooter and pushed him into the oncoming car.’ Images from Philadelphia shows stores in the city being looted. Philadelphia Police tweeted: ‘*Alert* A large crowd of appx 1000 is looting businesses in the area of Castor and Aramingo. Avoid the area; About 500 people had gathered at a West Philadelphia park Tuesday night and began marching through the neighborhood, chanting and demanding the names of the officers who opened fire.

There were sporadic reports of arrests in other areas of the city Tuesday night around 9 p.m., as well as the video of people streaming into stores and stealing goods as they left.

Hundreds of people had already taken to the streets in west Philadelphia Monday night and into the early hours of Tuesday, with interactions between protesters and police turning violent at times, the Inquirer reported.

Video showed many yelling at officers and crying.

Dozens of protesters gathered at a nearby park, chanting ‘Black lives matter.’

Police cars and dumpsters were set on fire as officers struggled to contain the crowds. More than a dozen officers, many with batons in hand, formed a line as they ran down 52nd Street, dispersing most of the crowd.

The 52nd Street corridor was also the site of protests against police brutality at the end of May, after George Floyd was killed by Minneapolis police. Those protests have been the subject of City Council hearings, with protesters describing harsh and unnecessary tactics, including tear gas and projectiles fired by police. Wallace was shot before 4 p.m. Monday in an episode filmed by a bystander and posted on social media. Witnesses complained that police fired excessive shots. Officers said they found Wallace holding a knife and ordered him to drop the weapon several times. Wallace advanced toward the officers, who fired several times, said a police spokesperson

Police arrested at least 91 people during unrest Monday night and Tuesday morning in Philadelphia, with three people cited for failing to disperse and about a dozen charged with assault of an officer.

Authorities had previously said 30 officers were injured in the unrest, most of them hit with thrown objects like bricks.

One officer was still hospitalized Tuesday with a broken leg after being purposely run over by a pickup truck, police said.

In video filmed by a bystander and posted on social media, officers yell for Wallace to drop a knife. In the video, Wallace’s mother and at least one man follow Wallace, trying to get him to listen to officers, as he briskly walks across the street and between cars.

Wallace advanced toward the officers, who then fired several times, said police spokesperson Officer Tanya Little. Wallace’s mother screams and throws something at an officer after her son is shot and falls to the ground.

The video does not make it clear whether he was in fact holding a knife, but witnesses said he was. Police would not confirm any details about the weapon Wallace was alleged to be holding Tuesday, saying it is still part of the open investigation.

Wallace was hit in the shoulder and chest, Little said. One officer drove him to a hospital, where he was pronounced dead a short time later, she said. 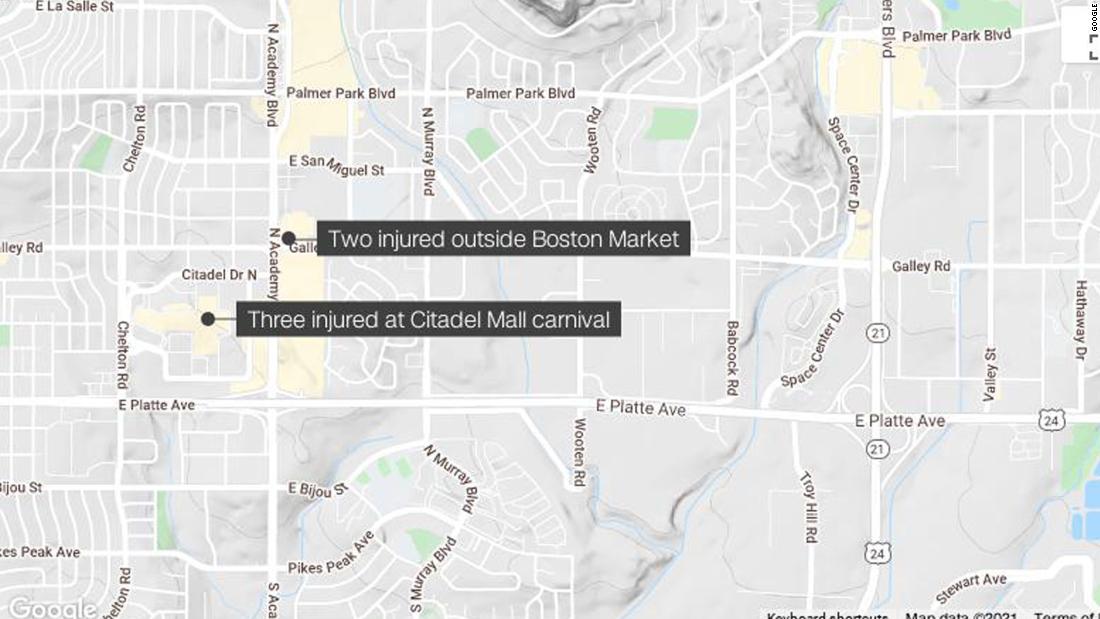