All but three local authorities in England saw coronavirus infections fall last week, official data shows as pressure on NHS intensive care units has started to ease for the first time since the winter wave took off.

Public Health England figures published today reveal 146 out of 149 areas (98 per cent) recorded a drop in weekly positive tests in the seven days to January 31, with cases falling in all English regions for the second week running.

Infection rates plunged by more than 33 per cent in a third of local authorities and fell sharply by over 25 per cent in another 35 places. Cases are also down in every age group and rates have halved in care homes.

Meanwhile, latest NHS England data published today showed there were 5,283 patients in ICUs across the country on the last day of January, down slightly on the previous week, when there were 5,446 beds in use.

It is significant because it marks the first time ICU capacity has eased since the highly-infectious Kent Covid variant started to spiral out of control in December, suggesting the winter wave has passed its peak and the NHS will not be overwhelmed.

Meanwhile, the latest Government Test and Trace report published today showed coronavirus infections fell by 41 per cent in the last two weeks, in another sign the crisis is firmly in retreat. The programme reported 196,257 positive tests in the week up to January 27, down from 333,802 in the seven days to January 13.

All key metrics now indicate the darkest days of the winter crisis are behind us, with the number of Covid hospital patients in general beds dropping to its lowest level for a month and virus deaths falling by a quarter in a week.

But there is mounting Tory anger over ‘goalpost shifting’ on lockdown as ministers and SAGE scientists suggested case numbers need to come down further before any ‘significant’ easing, shifting away from No10’s original ‘protect the NHS, save lives’ mantra.

Pressure is growing on Boris Johnson to commit to a major relaxation of the draconian measures within weeks, with all the key indicators falling and the 10million most vulnerable people already injected with their first vaccine dose. But there is alarm that the bar for allowing the economy to get back up and running is being lifted, with dire warnings about the threat of mutant coronavirus added to concerns about the strain on the NHS.

Vaccines minister Nadhim Zahawi appeared to indicate this morning that the government is looking at the top nine risk categories – around 32million people – as the trigger point for a widespread downgrading of measures. SAGE member Professor Andrew Hayward gave a similar message as he said there could be a ‘significant return to normality’ after all over-50s are vaccinated.

So far the PM has only said that he will unveil a route map out of lockdown on February 22, after the first four most vulnerable groups have been covered. There were claims today that Chancellor Rishi Sunak is again leading calls within Cabinet for lockdown to be eased as early as possible – in contrast to the more cautious tone adopted by Mr Johnson recently.

MailOnline has developed an interactive tool to show you how the infection rate in your area has changed in the most recent week.

Latest NHS England data published today showed there were 5,283 patients in ICUs across the country on the last day of January, down slightly on the previous week, when there were 5,446 beds in use. It is significant because it marks the first time ICU capacity has eased since the highly-infectious Kent Covid variant started to spiral out of control in December The latest NHS Test and Trace report published today showed coronavirus infections fell by 40 per cent in the last two weeks, in another sign the crisis is firmly in retreat. The programme reported 196,257 positive tests in the week up to January 27, down from 333,802 in the seven days to January 13. Infections hit a record-high 389,946 in the week ending January 13 Despite the figures show 23 NHS trusts across England did not have a single spare intensive care bed on January 31. These included University Hospitals Birmingham NHS Foundation Trust, one of the largest trusts in England, along with Sandwell & West Birmingham Hospitals NHS Trust Covid deaths are down by a quarter in a week, in another sign the winter wave is now firmly in retreat Infections have plunged by a similar amount in that time, but senior Tories have accused SAGE of ‘goalpost shifting’ over plans to ease lockdown

As the pandemic chaos continue to rage today:

Despite the country heading in the right direction, the NHS figures show 23 trusts across England did not have a single spare intensive care bed on January 31. These included University Hospitals Birmingham NHS Foundation Trust, one of the largest trusts in England, along with Sandwell & West Birmingham Hospitals NHS Trust.

But the problem was not confined to the Midlands, as major trusts all over the country — including in Merseyside, London, Derbyshire and the home counties — also reported having no spare critical care capacity. Even hospitals in the South West, which had managed to avoid the worst of the pandemic throughout 2020, were seeing their ICUs pushed to the brink, with Portsmouth Hospitals University National Health Service Trust and the Royal Cornwall Hospitals NHS Trust recording 100 per cent occupancy.

Despite lockdown starting to bring Britain’s winter wave under control, ICUs nationally are still almost 70 per cent busier than they have been at any time over the past five years. For comparison, there were 3,034 critically-ill patients at the same time last winter, and the average over the last four years stood at 3,183. Vaccines minister Nadhim Zahawi (left) appeared to indicate this morning that the government is looking at the top nine risk categories – around 32million people – as the trigger point for a widespread downgrading of measures. But there are claims Rishi Sunak (right) is among the Tories growing concerned about shifting goalposts

Oxford’s Covid vaccine could save tens of thousands of lives because it can cut the likelihood of catching coronavirus and passing it on by around two thirds, scientists say.

Modelling produced by SAGE members from Warwick University predicted that more than 150,000 more people could die in 2021 if lockdown rules were lifted in March or April and vaccines did not stop people from spreading the virus.

But with a 60 per cent infection-blocking capability – slightly lower than the 67 per cent that Oxford claims its vaccine is capable of – this could be halved, saving tens of thousands of lives.

Oxford researchers, who are making their jab with pharmaceutical firm AstraZeneca and delivering more than a million of doses per week to the UK, confirmed last night that trials suggested the jab would stop most people from passing on the virus.

This is critical because uptake will not be 100 per cent and not everyone who gets the vaccine will be protected by it, meaning the virus will still be a danger to some.

Lifting lockdown after vaccinating people with jabs that don’t stop the spread, the Warwick experts warned, would lead to ‘an uncontrolled wave of infection in which only those successfully immunised will escape.’

Dr Paul Hunter, a scientist at the University of East Anglia who was not involved with the research, said social distancing could have to stay for another year in 2022 before it would be safe to return to normal.

There are still about 35,000 people in hospital with Covid across the UK, which is still far higher than the 20,000 at the peak last spring. About 3,700 virus patients are fighting for their lives in ICU, compared to around 3,300 during the darkest days last April.

More positive statistics show the number of patients waiting longer than an hour to be handed over from ambulance teams to A&E staff at hospitals in England has fallen to its lowest level this winter.

A total of 2,339 delays of over 60 minutes were recorded across all acute trusts in the seven days to January 31, according to PA news agency analysis of NHS England figures.

This compares with 3,283 in the previous week, and 5,513 in the seven days to January 10 – the highest weekly figure so far this winter.

A handover delay does not always mean a patient has waited in the ambulance. They may have been moved into an A&E department, but staff were not available to complete the handover.

The figures come as the number of hospital patients in England with Covid-19 dropped to its lowest level for a month. A total of 26,374 hospital patients were recorded in English hospitals as of 8am on February 3 – the lowest since 24,957 on January 3.

Patient numbers peaked at 34,336 on January 18, since when they have fallen by 23 per cent. The number of hospital admissions of people with Covid-19 has also decreased. A total of 2,347 admissions were recorded on February 1, down 22 per cent compared with January 1.

The figures suggest tighter restrictions on people’s movements and activities introduced across England after Christmas, culminating in the nationwide lockdown from January 5, are continuing to have an impact. Hospitals in some areas of the country are still experiencing pressures, however.

It comes as Tory anger mounts over ‘goalpost shifting’ on lockdown today as ministers and scientists suggested all over-50s should get vaccines before any ‘significant’ easing.

A supporter of Rishi Sunak told the Telegraph this morning: ‘Rishi is concerned that the scientists have been moving the goalposts in recent weeks. It’s no longer just about hospitalisations and protecting the NHS but cases and case numbers.’

They said Mr Sunak was adamant this third national squeeze must be the final lockdown and heralded it a ‘fat lady sings moment’ – the point at which Britain draws a line under a cycle of lockdowns for good.

Treasury sources played down the reports this morning, insisting those are ‘not things he has said’. But they were hailed by lockdown-sceptic Tory MPs, who said he was ‘quite right’. Asked on Today whether the government was shifting the goalposts on when lockdown can ease, Mr Zahawi said: ‘I think you’ve got to make sure your vaccination programme has protected the top nine categories in phase one…’

He reiterated that the PM will set out a roadmap and the intention is for restrictions to loosen ‘gradually’ from March 8, starting with schools.

Mr Zahawi declined to give a date for when the first nine groups in the priority list will have received their vaccine, but said people could ‘do the maths’.

Speaking to BBC Breakfast, Nadhim Zahawi said: ‘We will set out our target (for vaccinating groups 5-9) after we have hit our February 15 target.

‘But you can do the maths. We did 600,000 in a single day – the deployment infrastructure that we’ve built can do as much vaccines as we get supply, so the limiting factor will be vaccine supply.

‘You can see that in the next 10 or so days, we’ve got to do another almost touching five million and so if we keep that rate up we will very quickly go down the list of the top nine.’

Pressed on whether that meant it would take another 35 days from February 15 to have jabbed all 31 million people in the first nine cohorts, Mr Zahawi replied: ‘That assumes the supply, so I don’t want to commit to a date without going through it with a very fine toothcomb with the whole team, because our limiting factor is the supply of vaccines ultimately.

‘With any manufacturing process, especially one that is new, there are challenges around that, as we’ve seen in Europe and as we saw in the early days in the UK as well.’ 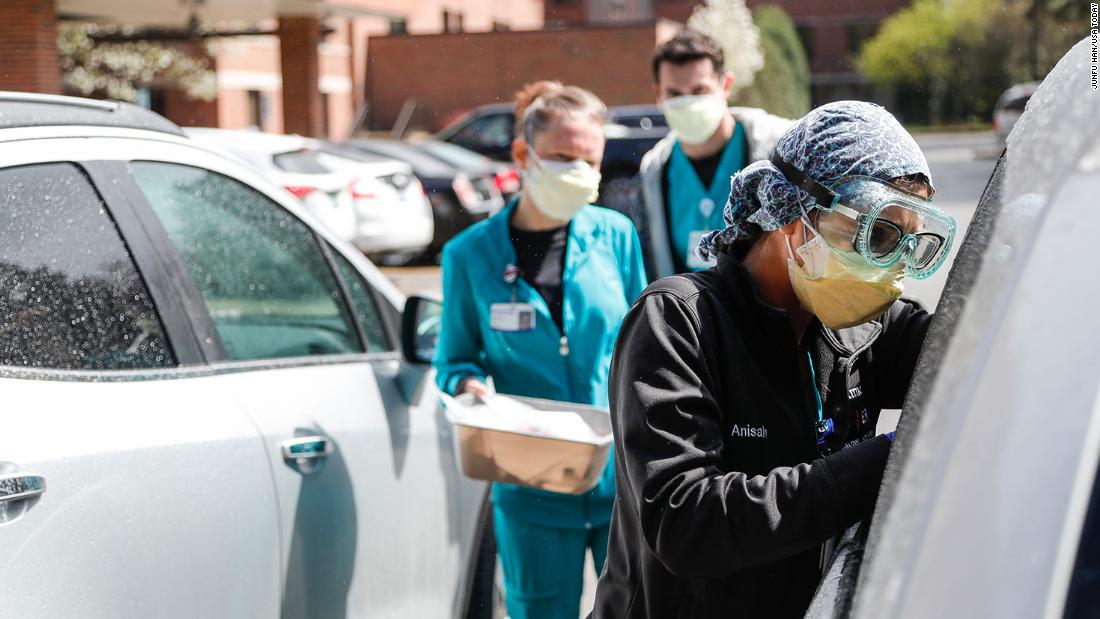 Nearly half of US states reported an increase in Covid-19 cases this week. Here’s what experts say can help stop another surge
2 seconds ago