Sometimes a particular hour and place overlap in a way that feels as if you’ve entered a portal from ordinary life into something more capable of magic. Maybe you’ve encountered it in an empty school after hours or a lamp-lit street devoid of all traffic, on playgrounds or the beach at midnight or the hallways of a Cineplex during screenings. When emptied of people, places that typically hold crowds feel as conjured as the worlds your mind moves through while reading a work of fiction — and just as yours to explore. It’s rare to find a place that doesn’t require trespassing to replicate that feeling. Yet Pailin Thai Cuisine in Los Angeles is such a place.

Pailin holds the romance of somewhere secret or abandoned, but it holds it during regular operating hours.

In the modest rectangle that is Pailin, all of the half dozen or so tables are pushed against the walls. A mirror runs along the right wall, and a dazzling collection of bright trinkets are pinned to the left. There are classical paintings of decorated generals. And there are bright metal fish and birds that bloom silver between intricate gold altars on red and cream walls. All together, the tiny interior with its maximalist Old World decor appeals to the part of me that wishes I could spend my life inside a jeweled egg.

You can slide deep into the blue vinyl booths until you’re tucked against one of the spangled walls. Down the empty aisle in the middle of the restaurant, waiters will bring you steaming bowls of khao soi or plates of glistening fried rice. Seated anywhere, you have a view of the entire place, right down to the kitchen doors at the back from which your order will emerge. The footfall of the staff, the hiss of hot dishes, and the clinking of silverware are all muffled by dark navy patterned carpeting. It’s the kind found in movie theater lobbies, and here, too, it evokes a sense of casual time travel by being a setting far removed from everything outside it.

Pailin is the only place I’ve ever sat comfortably with my back to a door. The loud colors and even louder music at the more popular Night + Market Song make that restaurant a punishing experience despite the tastiness of the food. The long wait times and chaotic seating at the wonderful Jitlada make it best for to-go orders. But Pailin is always perfect. 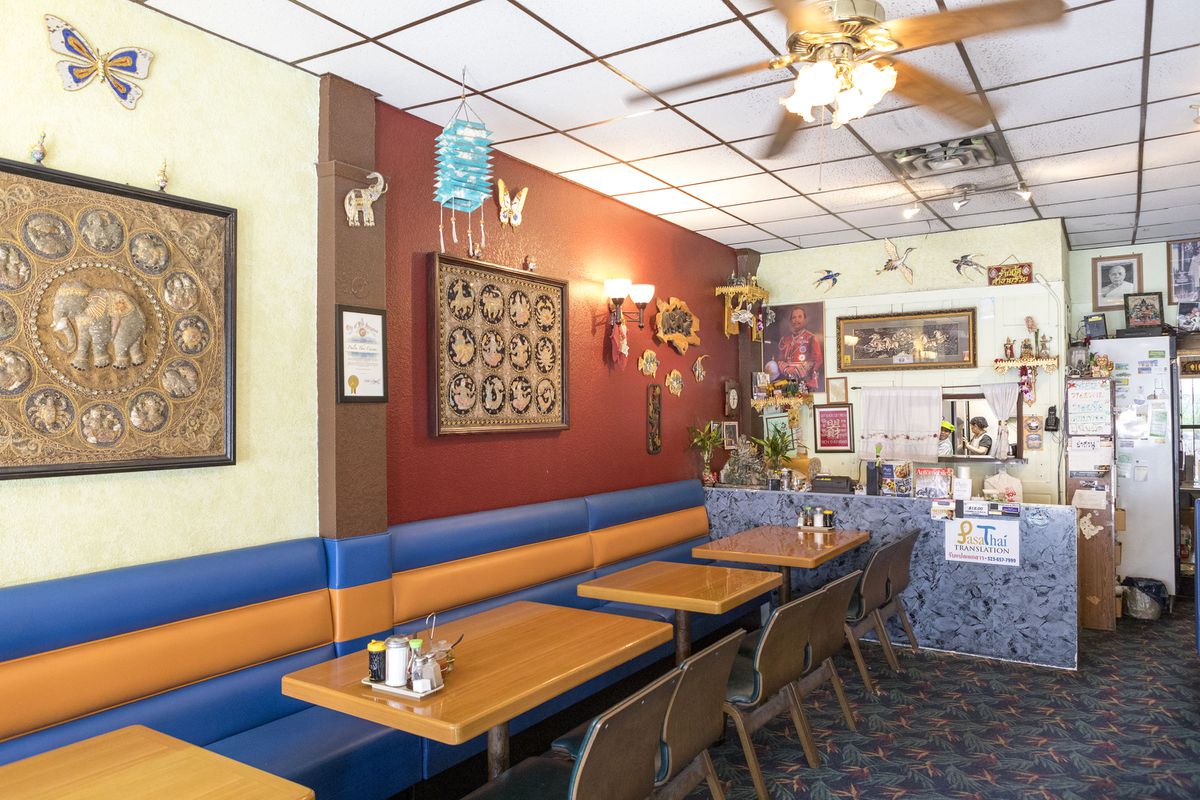 Pailin offers a respite from the part of Los Angeles that vibrates with the anxieties of its residents. In LA, you can dine among bored executives scarfing down $30 burgers they’ll expense, agents courting clients whose eager smiles don’t release even once during the entire meal, and 22-year-old influencers with straws hanging from their mouths who leave bread baskets untouched. All of them can be caught scanning their surroundings every few minutes to see who else is there and what that means for the status of the establishment and, subsequently, themselves.

I don’t have anything against them, but they’re not who I want to eat with. Theirs are not the conversations I want leaking over to my table. I don’t want an air of transaction at a place of rest, and I don’t want to see outfits so on trend they carry an expiration date. Pailin is for people who are not still pursuing something even while they’re sitting down. In fact, there are rarely many others there at all.

The stillness Pailin attracts is inherent to its style. It has no seasonal menu items or elaborately garnished cocktails. There’s very little to even indicate what decade you’re in. The place is as small and self-contained as a music box, which makes it feel entirely untethered to the city outside it. The restaurant has the ambience of the bear’s living room on a box of Celestial Seasonings Sleepytime tea. The result is a place where your attention rests exactly where you are.

No wonder Pailin draws people who have already achieved some constancy in their lives. I have only ever seen couples eating there. And only a very specific type of couple. They always sit side by side ⁠— not across from each other. Rather than being awkward, their closeness registers as natural, making the more conventional arrangement seem confrontational in comparison. These couples eat quietly, unselfconsciously. Their silences are the peaceful ease of people who have nothing to prove to each other and want nothing from anyone else.

Once, I spotted a man and woman who I guessed were joining each other after their workday. They sat side by side against the left wall and faced the center of the restaurant. His shirt was a little crumpled, her hair was slipping out of her ponytail. For two people, they had ordered a feast. Before them were heaps of spicy shredded papaya salad and peanut-garnished pad thai, little bowls of warm white rice surrounding bigger bowls of rich yellow curry. They ate with leisure, neither fast nor slow. Within that little restaurant existed an even smaller world only they inhabited and in which only one thing was occurring: a satisfying meal.

Eating at a restaurant is vulnerable in the same way any surrender of control is. You have to trust what you’re being served. You’re subject to someone else’s idea of a comfortable environment. Core needs are left in another’s hands, and regardless of what you ask for, how it arrives isn’t up to you. It mimics the surrender required in relationships.

At best, these small surrenders are what make both dining out and romantic partnership a relieving experience. It’s part of why Pailin is more a “relationship restaurant” than “date restaurant.” The lighting isn’t dimmed to flatter any agendas. There are no nervous pairs making a dozen separate calculations in their heads as they rush through a meal. Pailin rewards confidence in who you’re with and where you’re choosing to be. And like a good relationship, the little worlds within worlds that are possible in Pailin allow for a suspension of vigilance but the security of containment, a matryoshka doll effect of one’s own conjuring, available to the discerning who seek enchantment in everyday life.

If you’ve ever wished you could mute the world, or at the very least escape its dissonant background, come to Pailin. There is peace, a pause, a rate of time unique to a smaller square-foot radius. At least for as long as it takes to enjoy a hot bowl of something delicious, you can live in a world containing only your table and the warmth it offers.

Ayesha A. Siddiqi is editor-in-chief of The New Inquiry and writes on trends, culture, and media.

New York City FC advance to first-ever MLS Cup, to face Portland in final after putting away Philadelphia
8 mins ago

The US is averaging more than 100,000 new Covid-19 cases a day, the highest level in two months