Even though the likes of Old-Fashioneds, Martinis and Manhattans spring to mind when one thinks “cocktail,” it’s likely that the first alcoholic drink most people encounter in their lives is something far simpler: the tried-and-true combination of spirit and cola. Whether that spirit is whiskey or rum, or perhaps something a bit more localized and esoteric, these mixed drinks are go-to cocktails for a reason: They always work.

Now, more artisanal mixer offerings have been appearing on the market, created to reflect the craftsmanship that goes into creating great spirits and do them justice. Products from this category of mixers, such as Fever-Tree Distillers Cola, can instantly elevate a classic highball and highlight the qualities of the spirit being mixed with it, as they’ve been made with similar care and intention. Fever-Tree Distillers Cola, for one, is crafted from a carefully selected combination of ingredients that includes Caribbean kola nuts and Mexican limes, plus botanicals and spices such as Jamaican pimento berry and Madagascan vanilla, all which are meant to be paired with the flavors of craft spirits—from aged rum, to whiskey, to even liqueurs and amari.

Below, a troika of top distillers discusses what goes into making their products, while several of the country’s best bartenders detail how they would mix those spirits with Fever-Tree Distillers Cola.

Urban distilling poses certain challenges for Allen Katz, whose New York Distilling Co. has been making rye whiskey and gin in the heart of Williamsburg, Brooklyn, since December 2011. But being in a tightly packed, diverse environment also informs Katz’s distilling, allowing him to experience flavors from many different parts of the world.

Currently, Katz and New York Distilling Co. are helping build their own whiskey culture, forging a new trail for New York–based distilling with the creation and codification of Empire Rye, a class of rye whiskey that must be produced in-state, using at least 75 percent New York–grown grain. Katz’s Ragtime Rye was one of the first to garner the designation. When tasting, the differences between it and the rye whiskey that has long come out of Kentucky are immediately noticeable: Ragtime offers not just the expected spices, but also notes of sandalwood, citrus and vanilla.

Bartender Alex Jump, of Death & Co. Denver, finds that profile the ideal accompaniment when making an elevated version of the Whiskey & Cola. Her Road Runner highball is amplified by the addition of a peanut-infused amontillado sherry and cinnamon syrup.

“A great Whiskey & Cola requires great ingredients on both sides,” Jump says, “from both the whiskey and the cola.”

Another quintessential mixed drink, the Rum & Cola, isn’t popular only in Puerto Rico and throughout the Caribbean, but the world over. That’s partly because a rum like BACARDÍ Carta Blanca has been around for 159 years. Its smooth, light-bodied flavor profile makes it perfect for Rum & Cola, while the more premium BACARDÍ Añejo Cuatro Rum also works well. Wesley Cullen, the general manager of Casa BACARDÍ in San Juan, Puerto Rico, credits the careful craftsmanship of BACARDÍ’s distillers.

“We carefully choose which barrels to use, which requires a unique blending approach to address the maturation notes that develop while aging,” says Cullen. Since there are variations from batch to batch due to tropical aging conditions, the goal in blending is to land on a consistent flavor profile, “all of which requires experience, keen senses and a hands-on approach through each step of the rum-making process.”

Because Rum & Cola is a simple drink, Cullen feels there is more room to elevate it through superior ingredients. Jelani Johnson, a bartender at Gage & Tollner in Brooklyn, agrees. His Distiller’s Pick-Me-Up brings the flavors of the Caribbean together in a drink that Johnson cheekily claims can replace your daily cup of coffee.

“Building upon the rich backbone of molasses and baking spice present in Fever Tree Distiller’s Cola, BACARDÍ Añejo Cuatro acts as the spirit base,” Johnson says, “while Jamaican rum, pineapple, lemon and coffee create a complex, tropical melody of flavor that is sure to act as the perfect anytime refresher.”

Fever-Tree Distillers Cola also pairs well with partners beyond the expected whiskeys and rums. Rhine Hall, a smaller distillery located in Chicago’s Kinzie Industrial Corridor, makes delicious schnapps, grappas, fruit brandies and their own take on fernet. “We try to pull out an even balance of each herb, spice, spirit and sugar to harmonize these elements in our Fernet Lola,” says distiller Peter Johnson.

In Argentina, the combination of cola and Fernet-Branca is ubiquitous. In Johnson’s stateside take on the style of liqueur made famous by the big Italian brand, he uses a unique blend of eaux de vie as the base spirit that, when infused with Rhine Hall’s proprietary botanical blend (with notes of cinnamon, saffron, fresh coffee beans, eucalyptus and chamomile), makes for a softer, rounder profile.

“While it doesn’t shout ‘Fernet’ when blended with a cola,” says Johnson, “it does lend a pleasant bitterness, complexity and herbaceous spice to balance it out.”

Johnson believes Fernet Lola doesn’t need as much added sweetener or other modifiers to balance it in a mixed drink or cocktail; he advocates letting the fernet shine through. That was, likewise, bartender Samuel Garcia’s thinking behind his Lola & Cola, an Americanized take on the classic Argentine mixed drink. Garcia combines lemon juice, simple syrup and Fever-Tree Distillers Cola for an accessible cocktail meant to introduce fernet to beginners.

“Fever-Tree creates products with the bartender in mind,” Garcia believes. “Having them in a beverage will elevate any drink. The cola plays really well into that.” 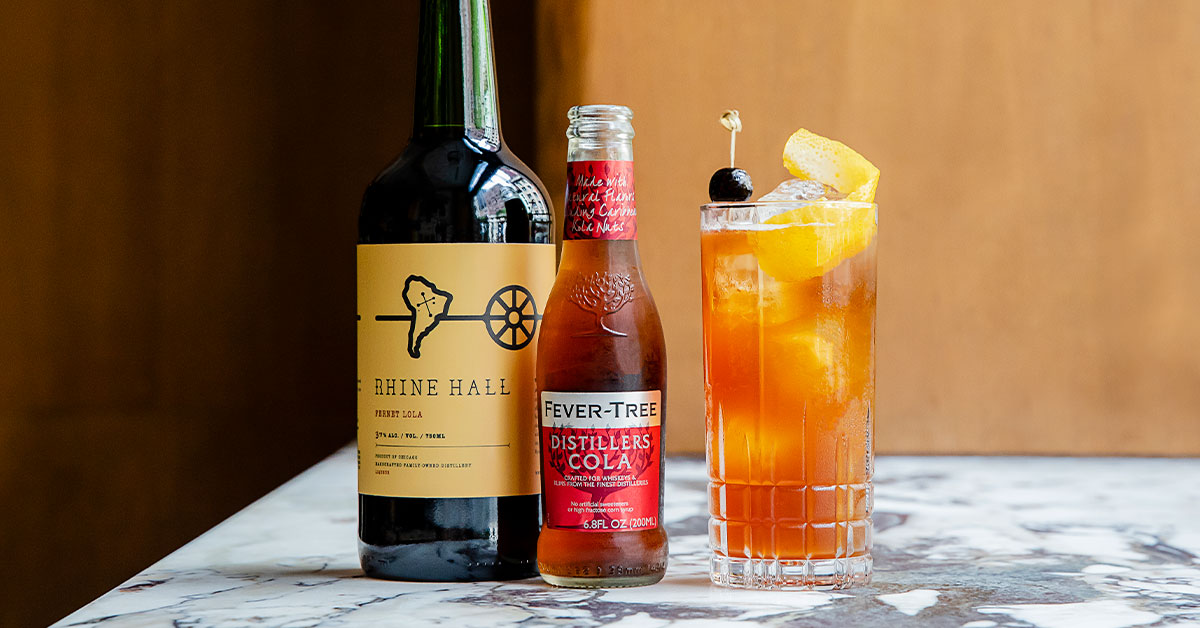 Samuel Garcia’s nod to Argentine tradition of Fernet & Cola, lifted with a hit of citrus.

The new issue of PopSci is full of bright young peeps

Tesla Autopilot Will Now Detect Emergency Lights, but Only at Night
3 mins ago

Tesla Autopilot Will Now Detect Emergency Lights, but Only at Night

Triangle Strategy got ‘fine-tuned’ based on demo feedback

Participate in the first course that Microsoft and Facebook offer to help MSMEs. It’s free!
16 mins ago

Beyoncé Reflects on Turning 40 in Heartwarming Thank You Letter: ‘I’m So Grateful to be Grown, Grown’
17 mins ago