Lora Vaughn was at a crossroads — and that was before mandated pandemic lockdowns came into play. Here’s her story of how life got sweeter after she stepped away from the CISO job.

The painting propped up behind Lora Vaughn is only half-done. Like so many things undertaken in the past 12 months, it was interrupted by unforeseen misfortune. In the painting’s case, a torn rotator cuff first disrupted operations. A broken ring finger caused another hiccup. Yet neither Vaughn nor the painting seem terribly concerned about the delay or the mishaps because in a year spiked with great changes, Vaughn has come through better than ever.

The past year has exacerbated the problem of burnout in the cybersecurity industry, and the pandemic has hit women’s careers particularly hard. We wondered how those in the cybersecurity workforce – already short on staff and gender diversity – might be impacted. Happily, during our search we found people like Lora Vaughn, senior director of security operations at Fastly, who have sunny stories to tell. (We’re still interested in your stories: Contact us at [email protected] with the subject heading “Tips.”) 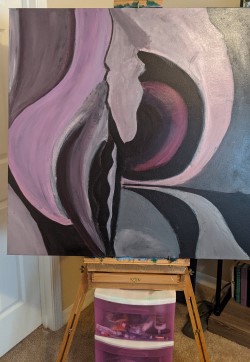 In February 2020, before the lockdowns, Vaughn was CISO at a midsize bank in Arkansas. And she’d recently filed for divorce. To take that job, she had moved two states west, away from friends and family in Alabama. Now she was busy hustling her dog and her ex’s dog in and out of the house whenever realtors came to show it to potential buyers.

“I was sitting in this big empty house by myself, going to work every day, and thinking, ‘Wow, life kinda sucks right now,'” she says. “I didn’t like the politics of the role and of the industry.”

When the pandemic lockdown began, she says, she had to fight for the SOC staff’s right to work remotely. She emphasized that them being physically present was unnecessary and put them at undue risk, and despite corporate culture pushing against it, she won that battle.

Having won the argument to run a remote SOC, she decided that if she was going to sit at home working by herself, then why not stay with her parents a few weeks.

“So I packed the dogs and clothes for a couple weeks, and drove to Alabama … and stayed there for the next six months,” she says.

Her divorce was finalized by a judge conducting hearings over Zoom. And Vaughn decided she didn’t want to go back to Arkansas. She’d already been considering a relocation to another city – Nashville and Houston were on the short list. Now she changed locations again, opting to look for jobs in Birmingham, Ala. – not just nearer to home but also a budding cybersecurity hub.

That led her to her new gig as senior director of SecOps at Fastly, an edge cloud platform.

“It’s a step down. I was a CISO; I report to the CISO now,” she says. But she’s not complaining. “I’m still doing cybersecurity work. … The step down lets me not have to deal with the political nonsense as much, which is nice. The banking industry is especially a ‘good ol’ boy’ network.”

Vaughn concedes that sometimes she misses being in an industry where cybersecurity teams are powerfully backed up by regulators. But she has no intention of going back to financial services. Having found a better quality of life for herself, she aims to extend the same to her remote SOC squad at a particularly difficult time. 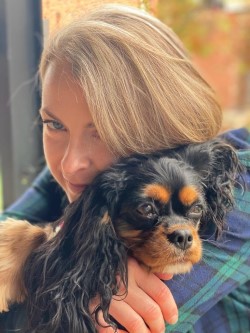 “The pressures of doing more with less are more present. … Focusing on the things that matter most and letting them know what things can slip — that’s really important,” she says. “That’s a conversation I have with my team pretty regularly. ‘Are you doing OK? Are you going for your walks?'” If she schedules over one of her team member’s prescheduled daily walks, she says, she wants to know so she can reschedule.

Vaughn herself might want to try walking more. Running has caused some troubles – namely, that torn rotator cuff. After she’d healed from surgery, Vaughn decided to run a half-marathon under the dreamy Spanish moss of Savannah, Georgia. During training, she slipped and broke her finger.

She did, however, complete the half-marathon and eventually will finish the painting. In addition, she just closed on a new house just outside Birmingham, complete with a doggie door for Daisy, and is running a SOC with a big smile on her face.

“The pandemic helped me prioritize what mattered most,” she says. “Not necessarily the job and the money. But being near people that loved me.”

Sara Peters is Senior Editor at Dark Reading and formerly the editor-in-chief of Enterprise Efficiency. Prior that she was senior editor for the Computer Security Institute, writing and speaking about virtualization, identity management, cybersecurity law, and a myriad … View Full Bio