With popular titles like She-Ra and the Princesses of Power and Kipo and the Age of Wonderbeasts finished, Netflix is facing a bit of a void when it comes to fantasy-tinged, plot-focused, all-ages animated shows. But the streaming service’s newest animated series, Centaurworld, may just fill that spot, if viewers can stomach the oddly disturbing horror elements that land alongside all the cartoon whimsy.

From former DreamWorks animator and Pinky Malinky director Megan Nicole Dong, Centaurworld is an animal-centered twist on the familiar portal fantasy, where a character in a mundane world finds their way into a magical one. In its 10-episode first season, the show tries to mesh silly content and serious ideas, with varying results. But the clever use of stylistic animation differences, as well as the unique approach to music for an animated show, makes it worth a watch — at least for viewers with a high tolerance for fart jokes.

Centaurworld follows a horse named Horse (Kimiko Glen), who falls through a magical rift that brings her to the brightly colored Centaurworld, a land full of half-human, half-animal hybrid creatures who frequently burst into song. The centaurs aren’t just traditional half-horse, half-human creatures — they come in all sorts of animal varieties, like the tiny-eyed mole-taurs and lumbering bear-taurs. Horse finds a herd of quirky creatures, led by pink llama-taur Wammawink (Megan Hilty), who decides to help her get home. In order to return to her war-torn medieval fantasy world, where humans battle against monsters, Horse needs to find different pieces of a magical key by traveling to different areas of Centaurworld and retrieving them from magical centaur leaders known as Shamans.

The animation is gorgeous, with a beautiful, subtle difference between the sharp lines and more “serious” style of the human world Horse is from, vs. the softer curves and brighter colors of Centaurworld. (Not to bring up an old debate, but think the original Teen Titans cartoon vs. Teen Titans Go!) It’s a clever distinction, making Horse, with her angles and more realistic style, look sharply out of place in the bubbly Centaurworld. But the cuter design of Centaurworld doesn’t mean life there is all sunshine and rainbows. The overly saccharine visuals — everything is sparkly and big-eyed and silly! — thinly mask the often dark and sometimes gross nature of the land.

Using whimsical magic to cover up a heavier storyline adds a distinct eeriness, in the same way that the golden-autumn-swathed Over the Garden Wall and the zany, brightly colored Adventure Time initially lull viewers into a false sense of genre and security, before revealing the pretty damn devastating backstory behind their respective settings. (Some sort of purgatory limbo and a post-apocalyptic nuclear wasteland, respectively.) The heavier plot elements and reveal tying the desolate human world to the magical Centaurworld don’t fully emerge until late in the season, with very little leadup, which makes their sudden appearance jarring. With all the goofy hijinks and often gross toilet humor, the sudden, sharp climax feels imbalanced. But the big reveals are thrilling and do promise a more exciting second season, should the show continue. 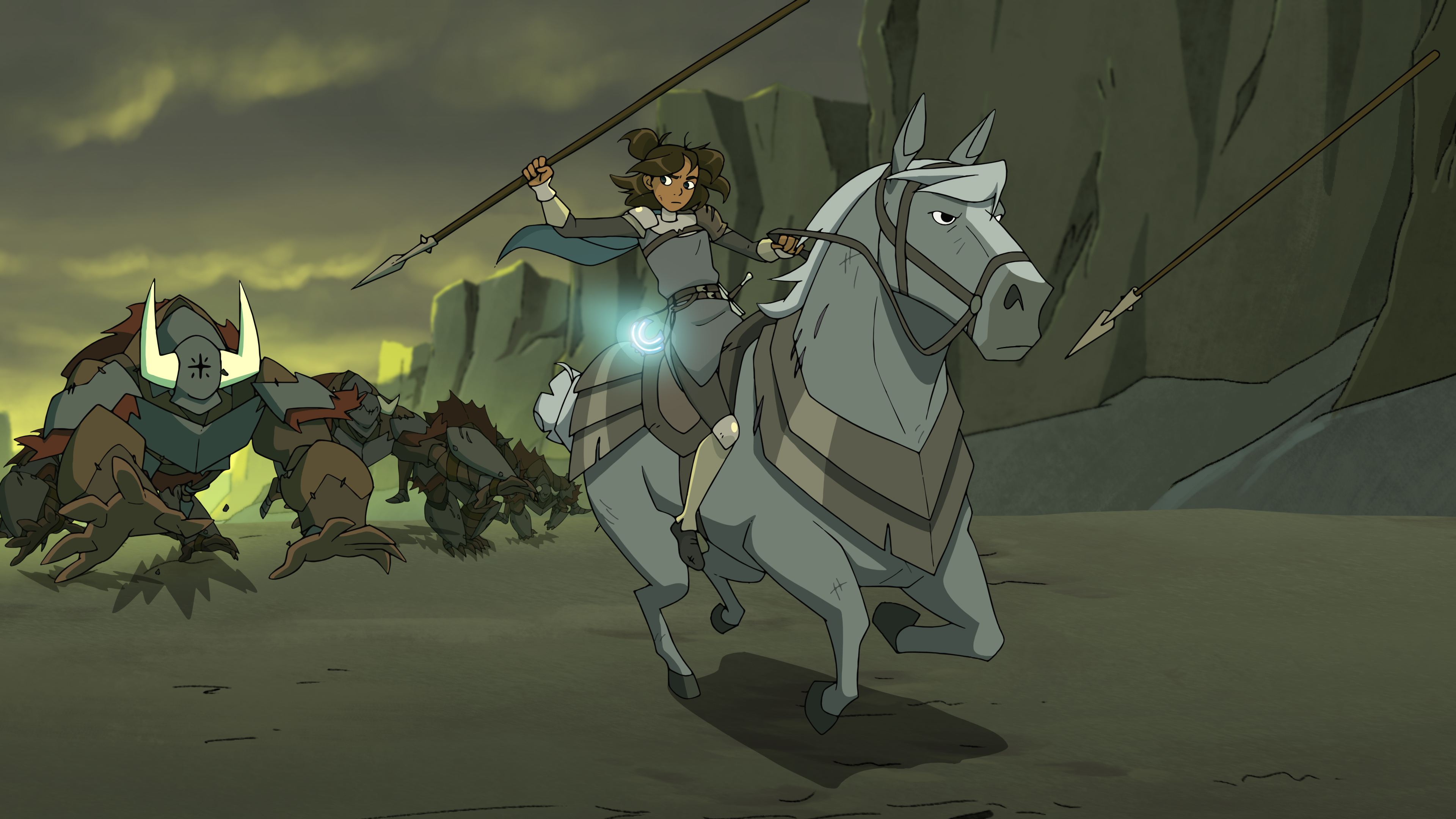 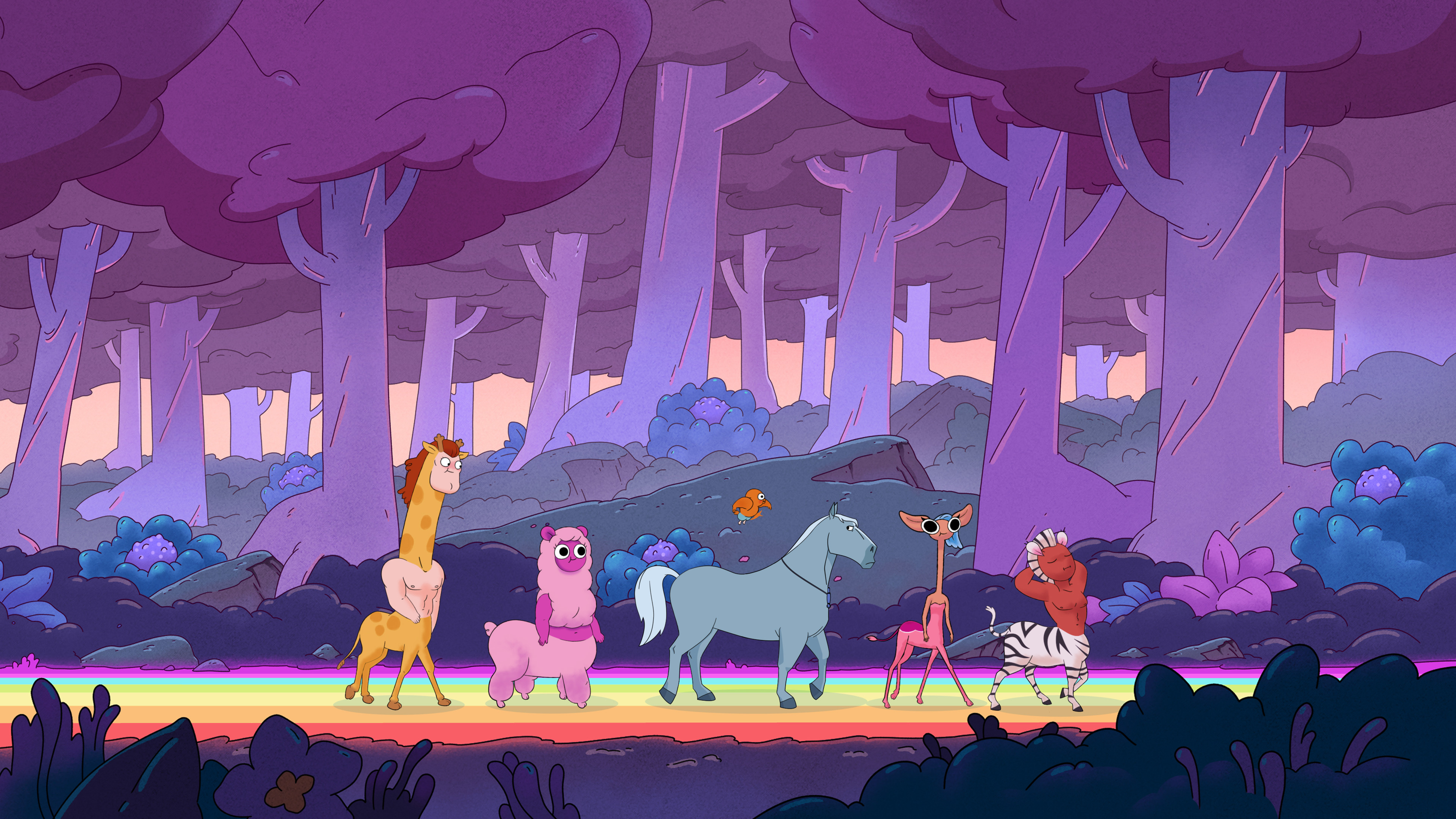 While the bubbly visuals covering the deeper plot is a neat way to subvert expectations, the full storyline doesn’t get the throughline it deserves. The character designs are unique and sometimes grotesque: The centaurs’ strange magic almost brushes the line of body-horror. For one thing, they can shoot tiny versions of themselves from their hooves, but those tiny versions immediately become horrified at their own existence, and destroy themselves. One centaur can shove things into a glowing portal in her stomach that seemingly stretches into infinity, and as a result, she steals anything and everything she can get her hooves on, to feed that hole. Another can painfully contort his facial features into “handsome mode.” It’s absolutely meant to be zany, but watching a giraffe-centaur hug his own butt and refer to his clouds of flatulence as his own father is a tad overwhelming.

It doesn’t help that many of the centaurs are gratingly annoying. After 10 episodes, they become familiar in a way that might be charming. It’s like babysitting a gaggle of preschoolers who continually make the same mistakes, no matter how many times you tell them “No, we don’t eat the paste!” If you can get past their grubby little hands and see cute little smiles beneath their glue-covered faces, the childishness can be endearing. That dynamic is regrettable, though, because Horse and Wammawink are compelling characters, each with their own glaring faults to overcome. Horse is a hardened warrior who does not allow herself to be emotional or get close to other people, while Wammawink thinks she knows best for her herd and therefore smothers them with advice and guidance, to mask her severe abandonment issues. They each grow as characters — with pretty banging song numbers to showcase their development.

The series’ music, by composer Toby Chu (who did the music for Pixar’s Bao), follows a different format than, say, the one-song-per-episode format of shows like Steven Universe. The pacing ends up being more akin to musical theater. The conversations often evolve into songs, which move the plot along. Characters have emotional revelations while bursting out in solos, they comfort each other while singing, and they use the musical numbers to shape their climatic story moments. It’s very different from other musical animated shows — in fact, the closest equivalent might be Apple TV Plus’s Central Park, which also feels more like a stage musical turned animated show, than an animated show with some musical elements.

Centaurworld is an ambitious attempt to blend wild fantasy-animal antics with a serious fantasy story. The first season feels off-balance, too light-hearted in the beginning and middle to be taken seriously in the end. But with interesting characters, deliberate and interesting uses of animation style, and engaging music, it’s intriguing enough to leave audiences hoping for more. Now that the bigger plot elements have come forward, a potential second season will be able to really play with juxtaposing all of the show’s warring tones, without hiding any cards.

The first season of Centaurworld is streaming on Netflix.

The 6 Biggest Issues with Early Retirement: Will These Happen to You?
16 mins ago